The Hub|X – Industry Talks for Actors program is a recent initiative by The HubStudio. The aim is to invite key note speakers for an engaging an informal conversation around the craft of acting and the industry in general. Each talk will be targeted around a specific topic with audience feedback and questions included. We are excited to offer a very special FREE Hub X online event, a Q&A with premier acting coach Lisa Robertson, in anticipation of her upcoming Online course with the Hub.

Lisa has spent over 18 years working with and training actors in LA and during this time, has coached Emmy award-winning and multi-nominated performances. She has trained as an actor in London, San Francisco (American Conservatory Theater) and in LA, studying under esteemed tutors such as Larry Moss in LA , under which she is know as his protégée’.  Come and join us! Join us for a very special FREE Hub X online event, as we talk to Alison Fowler & Stephanie Pringle from Chicken & Chips Casting, known as Australia’s most dynamic casting duo!

Alison and Stephanie will talk about the future of casting and changes in casting practices that actors can expect. Come and join us for what will be a really interesting and insightful discussion, by 2 leading Casting directors in the industry today. As we once again self isolate The HubStudio is offering a chance for all actors to come together and share their stories, thoughts and feelings with some expert tools and advice  from Hubster and renown mindset coach Angie Ford. This free online Q&A is a great way to check in and support the community, ask questions and feel connected at the same time. Angie has some fantastic tools to help us all make the most of this time before we head back out and make our dreams our realities once again, so come join us so we can all innovate while we isolate (again) together! Come join us for a very special Hub X as we talk to actor and writer Damon Herriman. Damon is a main stay of the Australian cannon as well as long overdue success in America. Damon has worked consistently since a child in all major genres of Theatre, Television and Film, having now been directed by Clint Eastwood, David Mamet, Steven Soderbergh, Gore Verbinski, Andrew Dominik, David Fincher, Quentin Tarantino and Barry Jenkins among  many more. He has been nominated for four ACCTA Awards, 3 Logie Awards and an Australian Film Critics Award. Damon most recently played Charles Manson twice in the same year in two seperate productions, in Once Upon A Time In Hollywood and season two of Mindhunter. Damon is warm, approachable and a genuine actors, actor. We can’t wait to hear more of his story. Come Join Us. 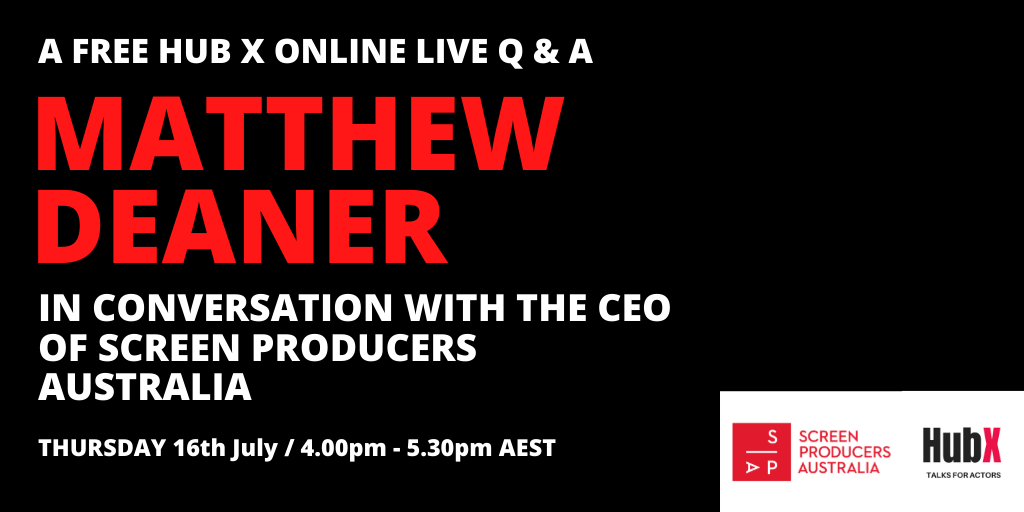 A special FREE online Hub X Seminar: Join the HubStudio as we talk to the CEO of Screen Producers Australia about the current and future film industry in Australia, post Covid.

Join us for a special Hub X online event as we talk to the Matthew Deaner, CEO of Screen Producers Australia about what is happening in the film industry at the moment and what we can plan for and expect moving forward post Covid. 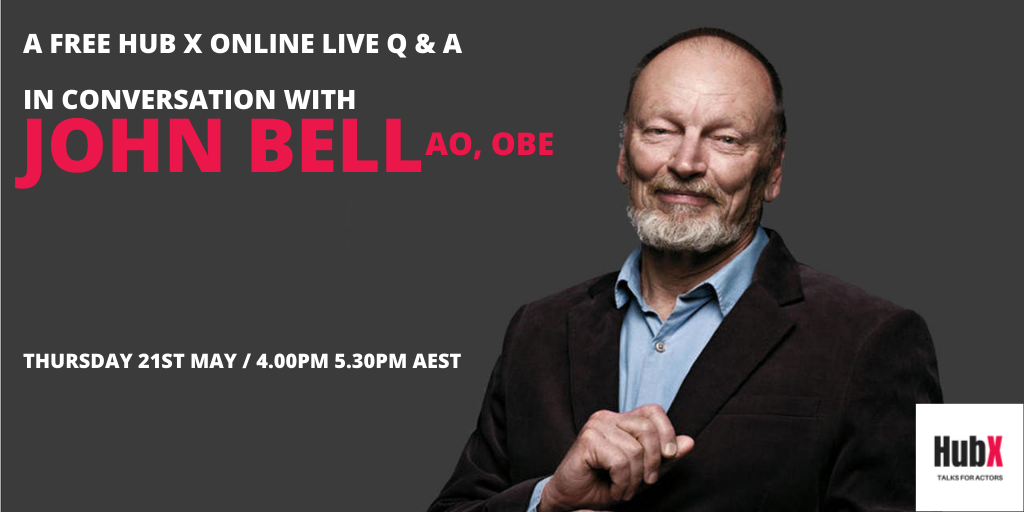 A special FREE online Hub X seminar with special guest, John Bell, one of the most well known personalities who has shaped the Australian Theatre Industry.
WHEN: THURSDAY 21st MAY / 4.00pm – 5.30pm SYDNEY TIME

A renowned personality in the Entertainment Industry, John Bell AO, BCE has had a long, esteemed career as both an actor, director and entrepreneur. During his forty plus years John has helped to significantly shape the Australian theatre industry to what it is today and is considered one of the pioneers of modern Australian theatre. John is an award wining actor, director and theatre manager, he has worked for the Old Tote Theatre Company; each of Australia’s state theatre companies, was Associate Artist with the Royal Shakespeare Company in the UK, co-founder of Nimrod Theatre (later Belvior St Theatre) and the founder of Bell Shakespeare Theatre Company. This Hub X is perfect for any actor looking to gain deep insight into our Australian heritage, from one of our modern founding fathers. A special event not to be missed. Come Join Us! 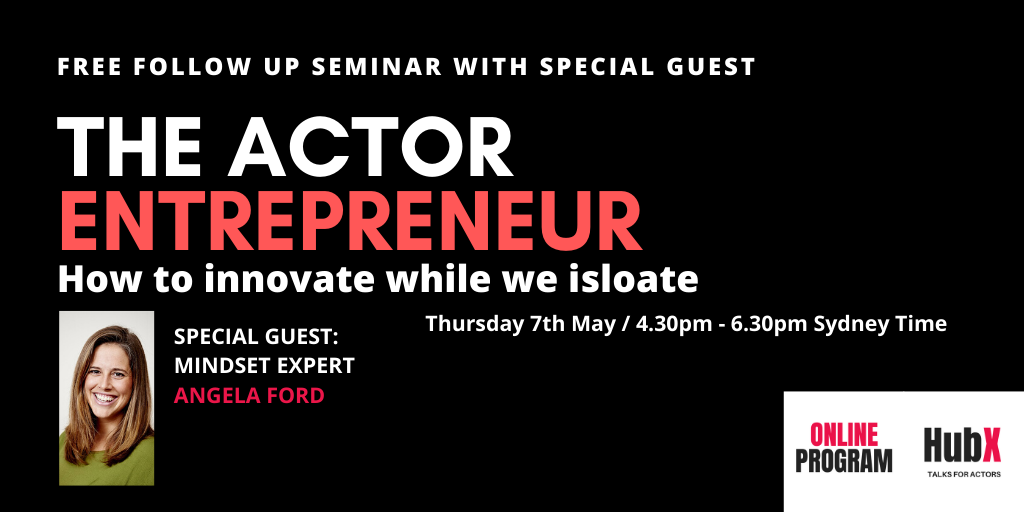 Seminar 3: How To Innovate While We Isolate W/ Special Guest Angela Ford

This special follow up event with guest coach Angela Ford is a perfect way to learn new mind set practices and techniques for a healthy and positive isolation experience for all actors. Over the free two hour online seminar we’ll discuss ways to keep fresh, stay sane and healthy over the coming weeks. As a follow up seminar, its a perfect way to keep in touch with your community and get some of the answers you need and feelings off your chest. Come Join Us!

Join us for a live Q&A with one of Australia’s leading Artistic Directors Eamon Flack, from one of Australia’s legacy theatre companies Belvoir St Theatre. In this unprecedented time, when actors and theatre makers cannot perform, rehearse or even meet to talk we will discuss with Eamon what can be done and what is being done for the artist in their community. Even as the government overlooks actors through JobKeeper, Eamon and Belvoir are making alternative plans. Come join us for a very special and poignant free Hub X online event.

Join Kevin Jackson in conversation for our first Hub X Perth, as Kevin gives the ‘inside information’ about his stella career as an acting coach and educator to Australia’s leading talent; including Cate Blanchett, Sam Worthington, Jess Marais, Sarah Snook, Baz Luhrmann, Richard Roxburgh, Joel Jackson and many more.

Let us dive into the topic of Branding, dispelling the many myths of the world’s latest buzz word! Branding, it is not an identity, but it is how somebody identifies you. George Konstand has been touted as “Australia’s own Branding Guru”. Author of The Game Entrepreneur and Founder of Brandology Enterprises.

Hub X : How To Create Your Own Successful Independent Theatre Company

No matter your level of passion for theatre, bringing professional productions to life requires more than honing your artistic consciousness to choose the right scripts and best actors. To ignite stage fever and keep audience and investor enthusiasm running high…… For most professional actors the bright lights of Los Angeles are , at one time or another a beacon to strong to ignore. As Australian actors become more popular and everlasting in the U.S. it’s now essential that all Aussie actors prepare for an international career…. Rejection in our industry is something permanent, and can be all pervasive. How we learn to deal with it as actors is vital to our longevity, overall success and wellbeing. This month come and unpack the notion of industry rejection with three of the best insiders on the topic. The New World Order: Creating Your Own Success In The Emerging Digital Media Market

This month come and meet three awesome actors who have created their own success. Ben Mathews creator of two series Bedhead for the ABC and Deadbeat Dads for MTV, AWGIE award winner and respected actor. Shae-Lee Shackleford one part of the mega successful SketchShe group…..